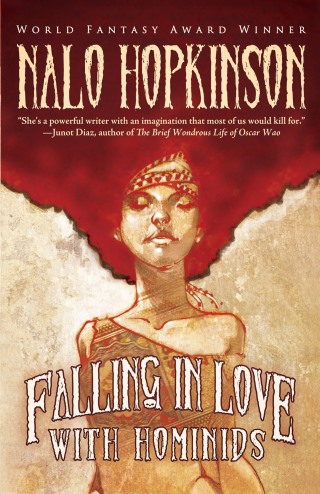 Falling in Love with Hominids

An alluring new collection from the author of the New York Times Notable Book, Midnight Robber

Nalo Hopkinson (Brown Girl in the Ring, The Salt Roads, Sister Mine) is an internationally-beloved storyteller. Hailed by the Los Angeles Times as having "an imagination that most of us would kill for," her Afro-Caribbean, Canadian, and American influences shine in truly unique stories that are filled with striking imagery, unlikely beauty, and delightful strangeness.

In this long-awaited collection, Hopkinson continues to expand the boundaries of culture and imagination. Whether she is retelling The Tempest as a new Caribbean myth, filling a shopping mall with unfulfilled ghosts, or herding chickens that occasionally breathe fire, Hopkinson continues to create bold fiction that transcends boundaries and borders.

Nalo Hopkinson: World Fantasy Award-winning author Nalo Hopkinson was born in Kingston, Jamaica, and also spent her childhood in Trinidad and Guyana before her family moved to Toronto when she was sixteen. Her groundbreaking science fiction and fantasy features diverse characters and the mixing of folklore into her works. Hopkinson won the Warner Aspect First Novel contest for Brown Girl in the Ring, as well as the John W. Campbell and Locus Awards. Her novel  Midnight Robber was a New York Times Notable Book and she has also received the Spectrum, Sunburst, Campbell, and Prix Aurora awards. Hopkinson currently teaches in the Creative Writing department at the University of California, Riverside.