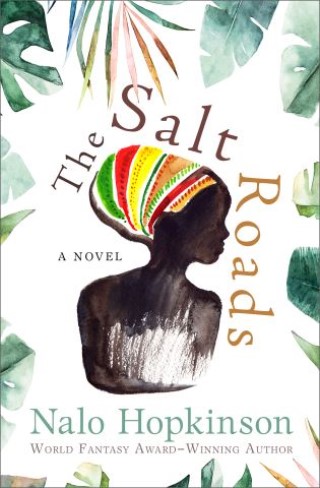 In 1804, shortly before the Caribbean island of Saint Domingue is renamed Haiti, a group of women gather to bury a stillborn baby. Led by a lesbian healer and midwife named Mer, the women’s lamentations inadvertently release the dead infant’s “unused vitality” to draw Ezili—the Afro-Caribbean goddess of sexual desire and love—into the physical world.

As Ezili explores her newfound powers, she travels across time and space to inhabit the midwife’s body, as well as those of Jeanne—a mixed-race dancer and the mistress of Charles Baudelaire living in 1880s Paris—and Meritet, an enslaved Greek-Nubian prostitute in ancient Alexandria.

Bound together by Ezili and “the salt road” of their sweat, blood, and tears, the three women struggle against a hostile world, unaware of the goddess’s presence in their lives. Despite her magic, Mer suffers as a slave on a sugar plantation until Ezili plants the seeds of uprising in her mind. Jeanne slowly succumbs to the ravages of age and syphilis when her lover is unable to escape his mother’s control. And Meritet, inspired by Ezili, flees her enslavement and makes a pilgrimage to Egypt, where she becomes known as Saint Mary.

With unapologetically sensual prose, Nalo Hopkinson, the Nebula Award–winning author of Midnight Robber, explores slavery through the lives of three historical women touched by a goddess in this “electrifying bravura performance by one of our most important writers” (Junot Díaz).

Nalo Hopkinson: Nalo Hopkinson is a Jamaican-born Canadian whose taproots extend to Trinidad and Guyana. She has published numerous novels and short stories and occasionally edits anthologies. Her writing has received the John W. Campbell Memorial Award, the Locus Award, the World Fantasy Award, the Sunburst Award for Excellence in Canadian Literature of the Fantastic, and the Andre Norton Award. Hopkinson is a professor of creative writing at the University of California, Riverside. She has taught numerous times at both the Clarion Writers’ Workshop and the Clarion West Writers Workshop. Hopkinson’s short story collection Falling in Love With Hominids will appear in 2015.